Reporting on the 'Reporter'

One likely reason why ufology is not taken seriously by mainstream science, muses The Pelican, is the dearth of serious literature on the subject. Of course, all but a small proportion of the UFO literature is pseudo-scientific nonsense, lies and fantasies. But what about the Serious books and journals, produced by Serious Ufologists? The Pelican has recently been studying an example of Serious UFO literature, Volume 31, No. 1 of the International UFO Reporter (January 2007).


This is published by the J. Allen Hynek Center for UFO Studies and is edited by a team of Serious Ufologists (although not Serious enough to meet The Pelican's exacting standards). It seems at first glance to be a sober, scientific publication, but on closer inspection it is seen to be a good old-fashioned nuts-and-bolts ETH magazine, with the usual paranoid stuff about ridicule and governmrnt coverups preventing the Truth about UFOs from becoming generally known and accepted.

The Pelican will, on this occasion, confine most of his attention to the main article in this issue, 'A shot across the bow: Another look at the Big Sur incident' by Robert Hastings, who takes up thirteen pages with his attempt to revive a report of an alleged encounter between a UFO and an Intercontinental Ballistic Missile which was launched from Vandenberg Air Force Base, California, to test an experimental enemy radar-defeating system and a dummy nuclear warhead, in September 1964.

The UFO allegedly caused the missile to crash, and the incident was filmed by the telescope/camera system at Big Sur, which had been set up to monitor the missile launches, according to "Lt. (now Dr.) Bob Jacobs", whose job it was to film the Atlas launch. "Following the dramatic incident, says Jacobs, a 16-mm version of the amazing film was shown to a small, select group at Vandenberg. Immediately thereafter, the crucial frames were cut out and quickly confiscated by two 'government agents' - possibly working for the CIA - who had been among those in attendance." Jacobs's account was endorsed by another officer, retired Major Florenz J. Mansmann Jr. He was said to have ordered Jacobs to attend the screening of the film.

The controversy centres on two articles written about the incident. Jacobs presented his account of the sighting in an article entitled 'Deliberate deception: The Big Sur UFO filming'. (1) A few years later, Kingston A. George, who was project engineer for the telescope experiment, published an article debunking Jacobs's interpretation of the incident as an attack by a UFO.(2) 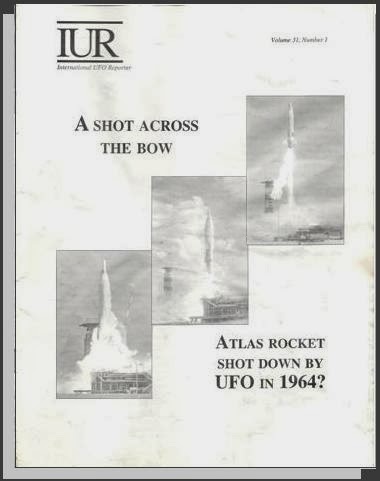 Jacobs begins his article with a preamble about the press and says that he had his original article on the Big Sur "Government-ordered UFO coverup" published in the National Enquirer. Now this publication could hardly be described as a scientific or technical journal, but his excuse was: "The Enquirer turned out to be the only publication I could find which was interested in printing the article at all." It perhaps did not occur to him that the editors of more serious publications did not agree with his interpretation of the events he described. Also, Jacobs could not remember the precise date of the alleged UFO incident, except that it was in September 1964. It seems that his recollections of the incident were not based on notes taken at the time, but on his unaided memory.

Kingston A. George tells us that Jacobs was responsible for the logistics of the operation at Big Sur, but not for the interpretation of the images recorded on the film, as he was "technically not authorized to view the pictures we were collecting". George was thus puzzled by Jacobs's "weird claims" published many years later in MUFON UFO Journal.

According to Jacobs, in his MUFON UFO Journal article, he saw on the film an object flying into the frame: "As the new object circumnavigated our hardware [an Atlas missile] it emitted four distinct bright flashes of light at approximately the 4 cardinal compass points of its orbit ... The shape of the object was that of a classic 'flying saucer'. In the middle of the top half of the object was a dome. From that dome, or just beneath it, seemed to issue a beam of light which caused the flashes described."

According to Kingston George, an unusual incident did occur. The two warheads were fired off as planned, but some of the packing material also trailed along and could be seen optically as well as by radar. This would give away the false status of the decoys. It was decided that this information should be kept secret, so that it would not be of use to a potential enemy, hence the coverup.

George pointed out that Jacobs would not have been able to see the details he described, as the image of the warhead "would be less than six-thousandths of an inch long on the image orthicon face, or between two and three scan lines. We could not resolve an image of the warhead under these conditioris; what is detected is the specular reflection of sunlight: as though caught by a mirror."

Hastings obviously prefers Jacobs's unlikely story to the explanation given by George, which is not surprising as he is noted for his UFO lectures about cases involving the military. His audiences are likely to prefer alien spacecraft to likely mundane explanations or tedious technical descriptions of what really happened.

Apart from an interesting piece on foo fighters by Michael D. Swords, the other articles are equally lacking in scientific rigour. Ann Druffel's 'Santa Catalina Channel cloud cigars', describes strange cloud-like objects seen at times in Southern California. Some of these could be orographic clouds, although most descriptions by witnesses are rather vague, and there are no photographs, and no meteorological data.

In his review of Kolm Kelleher and George Knapp's Hunt for the Skinwalker, Gildas Bourdais takes these jokers rather too seriously. (3)

The Pelican concludes that, while there is some good stuff in the Serious Ufologists' journals, it has to be sifted out from all the rubbish.