A Social History of Ball Lightning

Back in 1967 the astronomer Gerard Kuiper dismissed a 10% residue of unexplained ‘UFO’ reports with a wave of the hand, thinking it ‘reasonable to assume’ that this testimony must be “so distorted or incomplete as to defy all analysis”. Inconsistently, however, he advocated a major Defence Department-FAA programme to research “very rare natural phenomena” such as ball lightning. Why? Because “no adequate data yet exist of ball lightning”, even though its existence had been ‘known for at least a century’. [1]
This raises a very interesting question: How was it possible for science to ‘know’ anything with ‘no adequate data’? The answer is that science did not ‘know’, and as a whole declined to have anything to do with such storiesfor at least a century. Unpicking some of the reason and unreason behind this curious condition of scientific double-think is instructive. 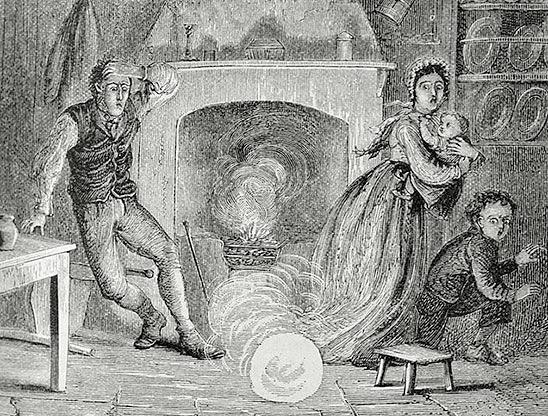 The difference appears in practice to arise because there are two levels of ‘explanation’ whose meanings are weighted differently in the two cases. There is a level of detailed physical understanding, i.e. a link-by-link chain of observed processes accurately modelled in theory; and there is a level of conceptual classification. When either of these levels is satisfied we experience a sense of accounting, and when both are satisfied there is a closure which we experience as ‘explanation’.
Neither in the case of ‘unknown natural phenomenon’ nor in the case of ‘unidentified flying object’ is the level of detailed physical understanding satisfied, by definition; the difference enters in the conceptual classification and has to do almost exclusively with the way these ideas are emotionally connoted. Specifically, it is the mechanistic aura of the former and the animistic aura of the latter that sets them apart. The history of science associates mechanistic models with productive explanations, animistic models with backward-looking resistance to explanations.The ETH and its analogues are for practical purposes regarded as examples of relict primitive animism.
Ball lightning (BL) emerges with some sense of explanation out of the primary category of ‘rare and unexplained phenomena’ inversely as it replaces (these days) animistic with mechanistic connotations. The collective term is emotionally neutral, the terms ‘ball lightning’ and ‘UFO’ are not individually so, and parity is broken; a coupled particle-pair of overall neutral charge is, so to speak, dissociated into two particles of opposite charge which fly in different directions in the social field potential. The positive ‘ball lightning’ particle is eventually scavenged by surrounding atoms of incomplete theory; the ‘UFO’ particle is left to wander, a free negative ion in a lonely search for an appropriate – and approbatory – theory with which to recombine. It is a pragmatic fact that an animistically connoted interpretation of an unexplained phenomenon is not supported by the usual socialinstitutional legitimations of science as a valid ‘explanation’. This is quite separate from the question of evidence.
It was also in 1967 that the distinguished British physicist and erstwhile intelligence mandarin R. V. Jones opined that most witnesses in cases which could not be explained had probably made “substantial errors”, and that ‘flying saucers’ were therefore almost certainly a fantasy; whereas the same corpus of ‘substantial errors’ allowed him to conclude that “an as yet unrecognised natural phenomenon” was “distinctly possible”. In illustration of this he noted that BL “has long been both asserted and disputed” and could perhaps be a similar sort of case. But he objected that unexplained UFO cases, in contradistinction to BL, were never reported by scientifically trained observers, finally declaring that “little short of a tangible relic would dispel my scepticism of flying saucers.” (2) The error of fact here (a great many unexplained UFO reports have been made by scientifically trained, indeed scientifically illustrious, observers) seems almost negligible beside the tangle of category mistakes, non sequiturs and imported assumptions in which it is embedded.