Culture is an admixture of repetition and variation, convention and creativity, signals and noise. It is ever new and forever old as humanity relives old dreams and nightmares or forgets and forges new ones. Part of the delight of history is the recognition that however new a given event appears, traces of the past can generally be discerned.

If the UFO phenomenon is an artifact of culture one would reasonably expect that cultural antecedents could be recognized for the major features it presents. Extraterrestrials, however, should be independent of culture and if they are newly arrived their characteristics should represent a discontinuity with the past. Abduction phenomenon students have recently offered some provocative claims that such discontinuities exist. Implicitly they are claims for the weakness of the sociopsychological paradigm and the converse power of the ETH.
David Jacobs argues that the imagery of the UFO phenomenon sprang up ex nihilo in 1947. Budd Hopkins states that the complex, controlling, physically frail beings of abduction reports bear no similarity to “traditional sci-fi gods and devils”. Thomas E. Bullard makes the rather more modest claim that the keystone of the abduction mystery, the interrupted journey of Betty and Barney Hill, had no cultural sources from which to derive the experience they reported. They were, to quote him, “entirely unpredisposed” since they were the first. These are forceful challenges to the proponent of the cultural origin of UFO phenomena. They have “Falsify me, I dare you” plastered on them. Can it be demonstrated that culture predisposed people to have these experiences?
The boldest claim is the one by UFO historian David Jacobs. Jacobs states “there was no precedent for the appearance or the configuration of the objects in 1947″ in popular science fiction films, popular science fiction or popular culture in general. They did not resemble the fanciful rocketships or earthly space travel contraptions in the SF literature. [1]
There is a trivial sense in which this is simply wrong. Disc-shaped spaceships have a number of precedents in popular culture. They appear in Buck Rogers as far back as 1930.[2] They appear in a Flash Gordon comic strip in 1934.[3] The science fiction illustrator Frank R. Paul was drawing saucer-like craft as early as 1931 and did so repeatedly.[4] 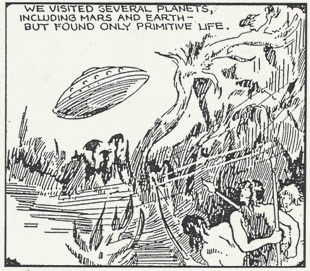 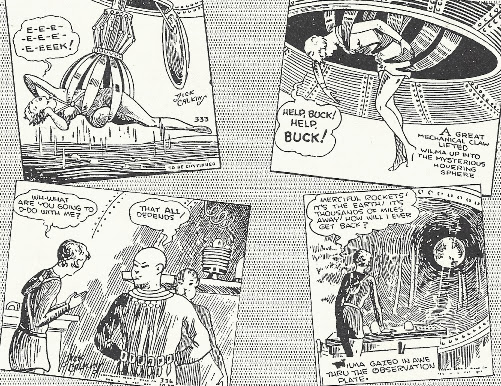 (i) capture by a giant clamp leading into a spherical alien spaceship,
(ii) examination while lying on a table in an electro- hypnotic trance,
(iii)conference with a subordinate and then a leader,
(vi) theophany while gazing at the Earth from an off-world vantage point,
(vii)return,
In the aftermath there is an instance of what Bullard calls “networking” in the aliens abducting Wilma’s sister, Sally. There is also an apocalyptic finale in which the Martian moon Phobos crashes on Mars.[18] 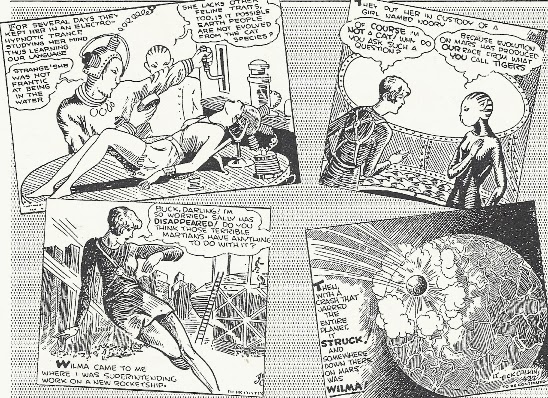 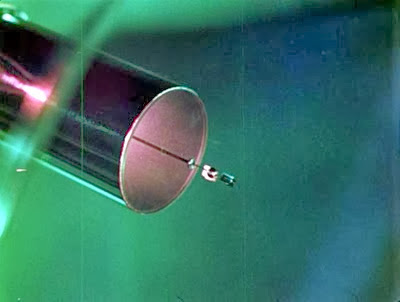 
These notes were added in a later issue of Magonia:


Here I must mention a piece of information that has come from our American colleague Martin Kottmeyer, which he came across too late for inclusion in his article ‘Entirely Unpredisposed’ in the last Magonia.
You will recall that in this article Kottmeyer described some remarkable correspondences between film and SF treatment of the alien experience, and ‘real’ abduction reports. In particular an episode of the sixties SF series Twilight Zone called The Bellero Shield shown on American TV a few days before the Hill Case, which features aliens with ‘wraparound’ eyes as described by the Hills – a feature not previously remarked on in contact cases. Martin Kottmeyer draws our attention to a piece of dialogue from the film:
CREATURE: I analyse your eyes. In all the universes, in all the unities beyond all the universes, all who have eyes, have eyes that speak. And all speak the same language.
JUDITH (awed, intrigued): How can ynou speak my language?
CREATURE: I learn each word just before you speak it. Your eyes teach me.


Now compare this with a remarkable section of the transcript of Barney Hill’s hypnotic regression:
BARNEY: Yes. they won’t talk to me. Only the eyes are talking to me. I… I… I… don’t understand that. Oh – the eyes don’t have a body. They’re just eyes…